The largemouth bass is a heavy-bodied fish with 56 to 70 lateral line scales and a large mouth, with the upper jaw usually extending past the rear margin of the eye. The back is olive green to brown, and the greenish sides are marked with a broad black band composed of somewhat oval blotches connected by shorter blotches. The venter is white, and between it and the lateral stripe are several rows of scales with darkened center, giving the fish a striped appearance. The dorsal, caudal, and pectoral fins are varying shades of green; pelvic and anal fins are clear to white.

With adult fish ranging from 12” to 30”, Largemouth bass occupy almost all aquatic habitats in New York. Thriving in lakes, ponds, and reservoirs, they are tolerant of turbidity and slack current. Spawning occurs from April to late May, when water temperatures reach 63º to 68ºF (17º to 20ºC).

Largemouth bass prey upon bluegills and sunfish in stocked ponds and upon shad, minnows, smaller sunfishes, crayfishes, and amphibians in natural habitats.

The largemouth bass is the primary target species of most recreational and tournament bass anglers in North America.

Bluegills are generally found in slow moving or standing water where there is plenty of vegetation or other shelter. They are a pretty fish, green to brown on their backs and upper sides shading into brown, orange, or pink with traces of vertical bars along their bottom sides. The breast is yellow to copper-orange, and the sides of their heads have metallic blue and green overtones. The large, square-shaped, blue black gill flap and conspicuous dark blotch on the back of the soft-rayed portion of their dorsal fins distinguishes bluegills from their close relatives, the pumpkinseed. Bluegills average four to ten inches in length.

Like other true sunfish, the bluegill eats mostly insects and crustaceans. But unlike its cousins, the bluegill will also consume some plant material.

Bluegills spawn from May to July. Nests are usually built close to shore in firm sand or mud in two and one-half feet of water. Bluegills often nest in colonies with nests sometimes right next to each other.

Bluegills fight hard when hooked, providing good sport for anglers. They bite just about any bait, artificial fly, or small lure dropped in the water. Because of these qualities, they are frequently stocked in farm ponds and other impoundments. 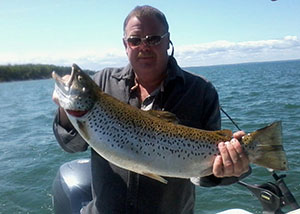 Brown trout have long been a popular game fish and can be found in waters all across New York State. Its ability to tolerate warmer water than either of New York State's native trout has allowed this species to do well in waters otherwise not able to support trout.

Brown trout are primarily found in streams, but also live in ponds and lakes. As the name implies, brown trout are brown in color with black and often red spots on the sides. However, in large bodies of water, fish tend to be silvery with scattered black spots.

Brown trout are generally faster growing and longer lived than brook trout. Fish more than ten pounds are fairly common, but in streams they seldom grow larger than two pounds. Many anglers enjoy fishing for brown trout because they are relatively wary and a challenge to catch. Brown trout can withstand heavy fishing pressure better than other New York trout. Lake trout is a native of New York State waters. This silvery or dark grey fish inhabits deep, cold, well-oxygenated lakes. In New York State, it is found mostly in the Adirondacks, the Finger Lakes and the Great Lakes.

Lake trout have different spawning habits than other New York State trout. Instead of building nests, they scatter their eggs over rocky shoals. In addition, lake trout spawn in lakes, not streams. Lake trout eggs have been found at depths of up to 200 feet in some of the Finger Lakes.

Fishing for lake trout can be quite specialized. In the spring, they can be caught by casting or trolling near the lake surface just after ice-out. Most of the year, they must be pursued in deep water using downriggers or wire line.

Northern pike are relatively easy to catch, can grow to over 40 pounds, and put up a good fight when hooked.

Northern pike are very adaptable and occur in a wide range of habitats. Northerns prefer weedy portions of rivers, ponds, and lakes, but large adults will often move offshore into deeper waters.

Northern pike can be distinguished from their cousins, the pickerels, by the scaleless lower half of the gill covers. Their bodies are dark green to brown with light bean-shaped spots. There is no distinct dark bar beneath the eye. The undersurface of the lower jaw has eight to 12 pores and there are often bright gold markings on both sides of the head.

Northern pike spawn in April or May, normally just after ice-out. They migrate into flooded marshes to deposit their adhesive eggs.

Northerns are delicious to eat. Their meat is white and flaky, and because of their large size, their bones are more easily removed than those of pickerels.

Due to their predatory nature, rapid growth, and large size, northern pike help control populations of smaller fish species. By feeding on small fish, they prevent over population and stunting. 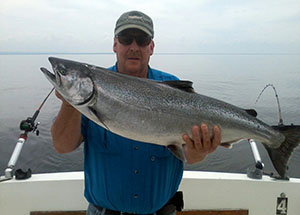 Also called king salmon, chinook salmon are the largest of the Pacific salmon. Chinook salmon have a limited distribution in New York State and are only found in lakes Erie and Ontario.

While adult chinooks spend most of their time in deeper, open water, they will follow prey fish into nearshore areas in early spring and late summer or early fall. Sexually mature chinooks congregate or "stage" around the mouths of streams in the fall in preparation for making their spawning runs. September normally marks the arrival of the earliest run of fish into lake tributaries, and peak runs occur in October. Spawning is completed by early November and the adult salmon die shortly thereafter.

There are two distinctly different types of fishing opportunity for chinooks - open water and tributary. Open water, or boat fishing on Lake Ontario, usually involves trolling flashy spoons or other bait fish imitations. Since chinooks are often suspended in the water column, meaning neither right below the surface nor on the bottom, lures must be presented at the appropriate depths. The salmon tend to move farther offshore as spring gives way to summer, and they may be five miles or more offshore until the pre-spawning staging movements occur. Juvenile salmon, which may weight up to 15 pounds, remain suspended offshore while the larger adults weighing 15 to 30+ pounds move to their staging area.

In rivers, chinook salmon may be taken using a variety of angling techniques. Salmon egg sacs (or clusters), flashy spoons, or deep diving plugs are effective in the lower river portions, while egg sacs and other egg imitations, including artificial flies, are good in faster upstream water areas.

Cohos, or silver salmon, are smaller in size than their cousin the chinook. Although larger specimens over 30 pounds have been captured, a typical adult coho weighs ten pounds.

Cohos are routinely stocked into Lake Ontario (and its tributaries) and provide excellent lake and river sportfishing opportunities. While natural reproduction of coho salmon has occurred in New York State waters, it is too limited to support a viable fishery. Therefore, DEC annually stocks hundreds of thousands of coho into the Lake Ontario system.

The behavior and distribution of coho salmon is very similar to chinook salmon. In early spring, cohos move inshore where they can feed upon smelt and alewife and find warmer water temperatures. During this part of the year, coho can provide extremely good fishing. As summer approaches, they move progressively offshore and anglers have less success in locating them. In the fall, sexually mature fish move back to the areas where they were stocked or hatched to spawn. Cohos spawn a little later in the fall then chinooks, with peak spawning runs occurring in October and early November. Anglers generally use the same techniques and gear for catching coho as they use for chinook. 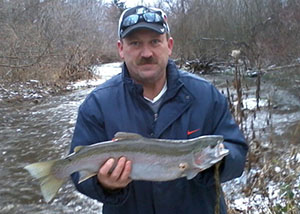 Natives of the Pacific Coast, rainbow trout were introduced into New York waters in the 1870s. Like brown trout, rainbows are more tolerant of warm water than the native trout and are found throughout the State.

In New York, there are two types of rainbows. The first, simply called rainbow, is found mostly in medium to large streams or small to medium size lakes. The second, called steelhead, is only found in lakes Champlain, Ontario and Erie and their tributaries. This anadromous (spawn in streams but live most of life at sea) fish uses these large lakes as their sea.

Rainbow trout are often very colorful fish. They have gray-blue to greenish backs and light colored sides with dark spots. Rainbows get their name from the pink or red band often present on their sides. During spawning, this band turns a deep red. Like other trout, adult rainbows tend to be more silvery when living in large lakes like the Great Lakes.

Quite variable in size, mature rainbow trout may weigh one or two pounds in streams and more than 15 pounds in the Great Lakes. Whether the fish is small or large, fishing for rainbow trout is a popular pastime for many New York anglers. Not quite as wary as brown trout, rainbows often put up spectacular fights when hooked, frequently making a series of acrobatic jumps. 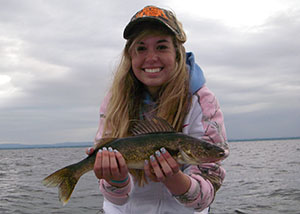 Walleye, the largest members of the perch family, often exceed 20 inches in length. Although not as widely distributed as yellow perch, walleye are found in every major watershed in New York State.

Walleye are similar in body shape to both sauger and yellow perch. However, walleye can be identified by the dark spot found at the bottom of their first dorsal fin and their large canine teeth.

Walleye prefer the deep water sections of large lakes, streams, and rivers. They have large, light-sensitive eyes that help them locate food in poor light. To protect their eyes from the sun, walleye stay in sheltered or deep water during the day and move into shallower water at night. They are voracious predators and use their large canine teeth to catch a variety of minnows and the young of other fishes. Yellow perch are often a favorite meal.

Spawning takes place from mid-March to early April. Adult walleye randomly release their eggs over rocky bottoms of lake shoals or gravel bars in rivers and streams. The eggs fall between the rock crevices to hatch.

Walleye are popular sportfish.  Anglers and non-anglers alike hold walleye in high esteem due to their excellent taste.

Yellow perch are relatively easy to catch and are often one of the first fish caught by youngsters and beginners.

While yellow perch are found in a variety of habitats, they prefer shallow, weedy protected sections of rivers, lakes, and ponds. Ranging in length from six to 12 inches, yellow perch are easily distinguished from other perch by the five to nine black vertical bars on their yellow sides.

Yellow perch spawn in April or May. Adults migrate into shallow weedy sections and randomly release long strings (up to seven feet) of transparent eggs. The egg masses eventually adhere to submerged vegetation, where they remain until hatching.

Yellow perch are most active in the morning and evening. They eat a variety of organisms, including aquatic insects, crayfish, and fish.

Yellow perch are very tasty and are popular year-round, especially with ice fishermen. When handling the fish, care should be taken to avoid their sharp spines and sharp gill plates.